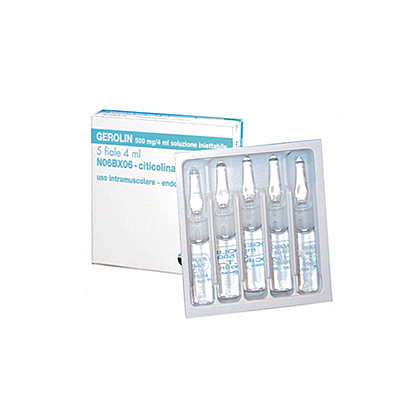 PHARMACODYNAMICS: GEROLIN stimulates the biosynthesis of structural phospholipids of neuronal membranes, improves the functioning of membrane mechanisms such as ion pumps and receptors; without regulation of which there cannot be normal conduction of nerve impulses. Due to the stabilizing effect on the neuronal membrane, GEROLIN identifies decongestants properties that help in reabsorbing of cerebral edema. GEROLIN inhibits the activation of several phospholipases, decreasing the formation of free radicals and prevents degradation of membrane systems and stores the antioxidant protective systems, such as glutathione, besides, stores neuronal energy reserve, inhibits apoptosis and stimulates the synthesis of acetylcholine. GEROLIN, also exhibits prophylactic neuroprotective effect in focal cerebral ischemia, improves the level of attention and awareness, reduces the appearance of amnesia, cognitive and neurological disorders associated with cerebral ischemia.

Bioavailability is 99 %. When administrated intravenously and intramuscularly the citicoline is being metabolized in the liver to produce choline and cytidine. After parenteral administration the choline concentration in the plasma of blood is increasing. Maximum concentration in plasma is from 1 to 24 hours (2ndpeak). Citicoline is largely distributed in the brain structures with rapid realization of the choline fractions into the structural phospholipids and cytidine fractions – in cytidine nucleotides and nucleic acids. Citicoline penetrates into the brain and is actively integrated into cellular, cytoplasmic and mitochondrial membranes, forming a structural part of the fraction phospholipids. Only 16 % of the administered citicoline dose is excreted from human body; 3 % by kidney, 1% by intestine and about 12 % with exhaled CO2.

• The recovery period of ischemic and hemorrhagic strokes

• Surgical intervention in the brain

• Cognitive disorder in vascular and degenerative diseases of the brain

Disorder of memory and other mental functions:

Complex treatment of other pathologies:

CONTRAINDICATIONS:high sensitivity to the components of the medication.

GEROLIN used for intravenous or intramuscular administration which is prescribed in a slow injection form (during 3-5 min) or drip form (40-60 drops per minute). The recommended dose for is 500-2000 mg per a day. The medication is compatible with all isotonic solutions for intravenous administration, as well as with hypertonic solutions of glucose.